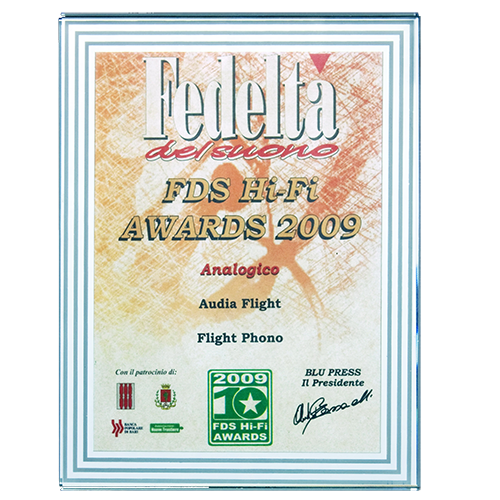 Audia Flight Phono
After 2 years of developing Audia Flight is proud to introduce his new phono preamp. A separate power supply, the dedicate input preamplifier boards, the high gain (74dB in his maximum selection), the low noise are only few of his characteristic. Of course the separate power supply was choice to improve the shield of the preamp and to reduce to zero the vibrations and resonance from the transformers.

Preamp
The Audia Phono preamp is based on our current feedback philosophy; the input preamp boards are different, for MM or MC cartridges, because the MM or MC cartridges have different electrical characteristic.
The MC input preamp board has a 60dB gain. It is a transistor input preamp, with a ultra low noise and very low offset output.
The MM input preamp board has a 40dB gain. It is a differential transistor input stage, with a very low noise and very low offset output.
On both input boards the impedance select is very close with the input stage and it is made by professional gold jumpers.
After the first gain stage, there is the input selector, made with a gold contact relays. Following the signal, there is the RIAA filter, made in passive configuration. The RIAA filter is made with 1% polypropylene and polystyrene capacitors. In this point it is possible to select a subsonic IEC filter too.
The second gain output stage is made with out last release of current feedback. The module, called MCF NG1, completed redesigned, has the noise improved, as improved the speed.
On the second gain stage it is possible to change the gain, from 24dB to 34 dB.
The second gain stage has a XLR balanced output too.
A mono selector can be an important element in achieving the best sound, playing a mono record and using a stereo cartridge on the turntable.
Our mono selector sums the left and right channels together in the same manner as a mono cartridge would and will provide much better sonic performance.
On the preamp chassis, there are a low noise mosfet power supply (+/-28V) for and another power supply (+/-15V), so, in total, there are six power supplier.
On the preamp board there is a offset protection; in case on the output there is a DC offset voltage, the unit will go in protection, saving the unit and all units connected on it.
It is possible to order the Audia Phono preamp with the input gain board desired (MM and MC, or two MM inputs, or two MC inputs).
Moreover, It is possible to change the input gain board of the second input in a second time.